Where Else Can You Find Me?

Doctor Who Touched by an Angel 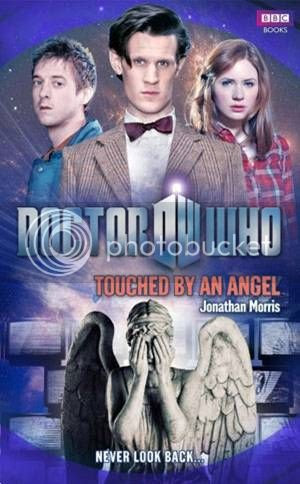 Doctor Who: Touched by an Angel
by Jonathan Morris

In 2003, Rebecca Whitaker died in a road accident. Her husband Mark is still grieving. He receives a battered envelope, posted eight years ago, containing a set of instructions with a simple message: “You can save her.”

As Mark is given the chance to save Rebecca, it’s up to the Doctor, Amy, and Rory to save the whole world. Because this time the Weeping Angels are using history itself as a weapon.

I never pass up an opportunity to read a Doctor Who book. I’m just too much of a nutcase about the series.

If you are familiar with Doctor Who or the extended Doctor Who books, the structure of the story will be familiar to you. Something surprising happens to some normal dude on 21st century Earth and the Doctor, Rory, and Amy decide to investigate the weirdness. As revealed by the title and the cover image, this is a Weeping Angel story and Team TARDIS needs to save the day before the Angels get what they want.

I liked this book. The story is pretty reminiscent of the episode Blink. The majority of the story is about Mark and how he handles being pursued by the Angels, and these Angels resemble the Blink angels more than the Byzantium angels, which is my preference. There’s the puzzle of a paradox and I enjoy paradox stories. I think the difference between the TV episodes and the print of a book makes this not as frightful or as grippingly suspenseful as the Angel episodes of Doctor Who, but I think it works in the story’s favour in this case. It’s not a challenging book, but it’s enough of a puzzle to keep me entertained.

I’d definitely recommend this to fans of Doctor Who and fans of the Weeping Angels. Definitely pick it up if you like Eleventh era Who and this particular baddie.
Posted by Freakish Lemon at 9:07 PM